An upcoming concert will feature classical music with a Japanese twist.

HidÃ¨ Takemoto, 40, of Chipping Barnet, is hosting a concert at St Mary’s in Finchley Central on April 7.

A budding musician from a young age, HidÃ¨ says: â€œI was a typical teenager, a rock star in the making. ”

However, when he moved to London to study music, he had an argument with his family in Japan. He explains: â€œNone of my family play musical instruments, so it was kind of a war between me and my parents when I told them that I am going to live in the UK to study music, using their money.

Moving to UK In 1999, HidÃ¨ enrolled at SOAS University where he studied Indian music and has since blended into his music in classical, rock, pop, Japanese, Spanish and Indian styles.

Since his arrival in London in 1999, HidÃ¨ moved to Barnet in 2007 where he gives guitar lessons in local schools.

â€œSometimes I have sushi in exchange for playing guitar at the Sushi restaurant in Camden Town called Sushi Waka, where I met my wife,â€ he reveals.

He will perform alongside mainly Japanese and European musicians at St Mary’s next month.

Each musician performs different styles, such as traditional song, Spanish drums, violins, and the iconic Japanese string instrument, the Shamisen.

HidÃ¨ adds: â€œI am lucky to have been a working musician, to do what I have always wanted to do since I was 15, supported by all these incredible musicians and friends.

Next Japanese band CHAI re-release their first LP in the US, performing in NYC and LA in September 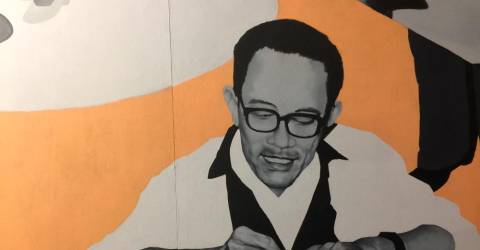